I'm a stubborn you-know-what.  When I have a goal in mind, I'm like a runaway truck going against traffic on a one-way street.  I will get to my destination eventually, but it may not be a pretty site in the rear view mirror.

This is exactly the way it was with some of the more rare, and difficult to obtain, tropical fruit trees that I wanted/needed for my very own.  I wasn't satisfied with mangos, grumichamas, or other plants easily obtained from mail order nurseries in Florida.  Nope...I wanted rambutan, mangosteen, longkong, and the likes.  Early on in my hobby, these plants were available thru Bryan Brunner's nursery in Puerto Rico, Montoso Gardens.  The problem was not in obtaining them, it was keeping the darn things alive after receiving them.

I lost many plants just days after getting them out of the box and into a container.  I understood that these plants were more sensitive than your average tropical fruit tree, but to lose every one of them so fast?  There was more to this than I certainly understood at the time.

So I cried, bitched, and moaned, shook my fist at the heavens, and finally talked with Bryan Brunner himself asking why my plants were not surviving.  One thing I have to make clear.  People like Bryan running an online nursery receive orders and process them.  If you order a plant that is in stock, they will send it to you. So if you don't ask questions up front, they cannot be held responsible for you losing a plant.  They have no idea what your experience level is.  I understand this and everyone else should too.  So my second mistake was in not asking questions at the start.  My first mistake?  To be honest, my first mistake was ordering plants like this at all having so little experience at caring for the ones I already had.

Bryan's first question to me was "Do you want me to send the plants out to you like I would ask them to be sent to me?".  Huh?  He went on to explain that he would either remove all of the leaves or at the very least, cut the leaves in half.  Moisture is lost thru the leaves.  A plant loses moisture, it dries up and dies.  Okay.  So why didn't Bryan do this in the first place?  Good question. And I received a good answer.  He learned that people want to receive a pristine looking plant with all of its leaves and each of them intact.  People would complain that their tree arrived with little or no leaves.  It didn't matter that the plant has a better chance of surviving this way.  How many times can you take the heat for that?  They also don't have the time to ask each and every customer these questions.  We have to assume some responsibility!

Bryan also went on to explain that keeping the plant under higher than normal humidity is the key to their survival.  The plant's survival clock starts ticking down the moment the soil is washed away from the roots. Below is a little bit of science to support this and was explained by someone much smarter than me!

Whether bare root roses or bare root fruit trees, from the tiny to the 15' tall, 3" caliper trees...the key is to address the shock of the bare root process- the root hairs are mostly blown off or dead from exposure to the air and they are how water and nutrients primarily enter.  The only way to minimize the chance that the non-functioning roots start to rot (besides fungicide) is to control soil moisture and you cannot do that in a oversized container.

The smaller container is a temporary one to have better control over soil moisture until new roots and root hairs have flushed out.  Can you go straight into the larger container?  Of course, but then how it is watered is more critical and if it is a cool time of the year, the days are short, or the humidity is not reliably high, then you have made your life a bit harder.  Well drained, soilless mixes to get a plant established enable you to take advantage of better oxygenation in the beginning and then move it after it is  reestablished into its final mix.  Raising humidity helps to then maintain soil moisture at a lower level to again reduce the chance that a bacterial/fungal/viral infection will opportunistically appear due to favorable conditions (for the pathogen).  Dead air in a plastic bag will accelerate the chance of rot, so it must be ventilated to a degree to allow for the exchange of fresh air.

So how to go about this?  Larger, or better equipped operations utilize misters and will continuously hit the plants with mist raising the humidity/moisture around the plant.  I'm not setup for this and I would be afraid of making the soil too wet as well.  In the beginning, when I had all of my plants in a grow room inside the house, I set up one of those little plastic, 4-tier greenhouses.  I would set an ultrasonic humidifier inside to boost the humidity like crazy.

All of a sudden, I had bare root plants starting to survive.  I wasn't 100% there yet and that was due to me continuously watering the plants during this process.  I had yet to learn that the humidity will take care of the plant while it nurses itself back to health.  More water in the soil only delayed or worse, killed the plant just as quick as letting it dry out.

Once I understood that after I initially watered the plant...and refraining from continuous watering, kept it shaded from full sun, and in a high humidity environment, I was on my way to 100% survival of my bare root plants.  The last thing I learned during this process was that every plant endured this period differently. Some were very quick to recover while others may take several months.  So do not be too quick to remove them from this environment.  And as mentioned above, fresh air circulation is important.  Much different from picking up a plant from your local nursery isn't it?!!

We had some folks on the forum lose some of their bare root plants due to the very mistakes I had made myself.  So I shared much of the following to the forum.  It works for me.  I hope it helps others or at least opens the eyes of those thinking about ordering a bare root plant for the first time.


Here's something I learned by doing it myself...I will no longer bitch about a shipper charging me $5 to bare root a plant.  I've done it.  I freaking hate it.  It's a pain in the butt...as well as the back, and it is time consuming if you are dealing with a clay-like soil.  So if someone has a bunch of plants to get out in one day, then my hat's off to him or her.  It's a lot of work to bare root, get it ready, and box up.  I know.  I've now done this many times while in Puerto Rico preparing plants to send home.

Well...that's it.  Like I said, this works for me.  There are a lot of good resources on our forum.  We just have to ask for help.  Don't lose a plant due to pride or being stubborn.
I've included some pics below for visual reference...and to show that even with the best preparation, bad things can and do happen. 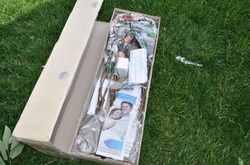 This is a very nice example of a good, strong box.  It is not only very rigid, it allows the person doing the shipping easy access to arrange the plants, anchor them, or fill with newspaper to keep them from shifting around.

There are good shippers out there, and there are terrible shippers.  Bryan Brunner is probably the best shipper I've ever ordered from.  He has a very unique way of securing plants that is second to none.

The benefits of bare root plants are that they are lighter and cheaper to ship.  They also don't have a heavy ball of soil that can shift in the box destroying everything in its path. 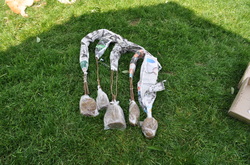 This shows properly prepared plants.  Roots wrapped in damp moss and contained in a plastic bag.  The leaves and branches have been wrapped in newspaper to help prevent damage. 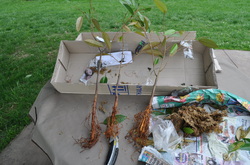 Healthy looking grafted durians.  Even so, within days of being potted up and into a humidity tent, most, if not all, of the leaves dropped.  They all recovered fine and did well for nearly eight months.

Each plant was slowly dying back.  Unknown to me, the plants had some sort of fungal disease or borer that was slowly wasting/eating away the plants from the inside out and I couldn't stop it.  To go thru all of those trials only to lose the plants to something like this doesn't seem fair doesn't it?  Just another reminder of how difficult some of these plants can be. 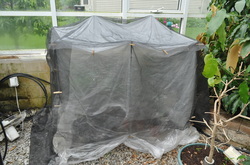 This is one of the structures I put up in the greenhouse for a bunch of bare root plants that just arrived.  I could always put more screen material over it if necessary.  A nearby fan was always blowing towards the bottom creating circulation.  If I stuck my head in there, I could definitely tell the difference with the humidity.

Wow...someone needs to do some greenhouse cleaning! 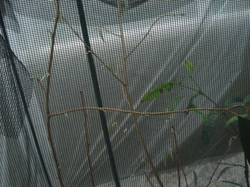 Some durian seedlings from Puerto Rico recovering nicely.  This is even after spending nearly 14 days in the freaking box thanks to USPS.  So much for Priority Mail eh?  All of the leaves from every plant in the box had already dropped by the time I got the box.  I never dreamed that any would survive.

If you look closely, you can see them starting to flush out. 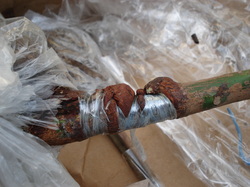 Not sure how to categorize this.  Stupidity?  Laziness?  Indifference?  The bottom line is that now matter how well YOU prepare, you cannot win against bad plants being sent to you.

This picture shows a grafted mango, I believe, that is in the later stages of extreme girdling.  Instead of using a stretchable wrap, or one that eventually breaks down, this plant was grafted using a non-stretchable plastic.  This by itself is not a huge deal and many many people use this when grafting.  However, when left on indefinitely, it will girdle and eventually kill the plant.  As you can see, the plant had already grown around the plastic...which was is no way giving ground.  I had a hell of a time getting that crap off the plant.  The plant did not end up surviving. 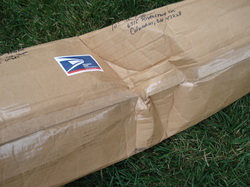 Prime example of a USPS shipment...at least in my experience.  Where we stay in Puerto Rico is not the best place to find boxes suitable to ship plants. We do what we can to make sure the plants do not shift around in the box and that the boxes are as stuffed with newspaper as possible.

What we cannot do is travel with the box to make sure that it is not run over by a truck, have a 200lb box thrown on top of it, or who knows what else.  My box had been nearly folded in half!  It was crushed flat right in the middle and most vulnerable spot 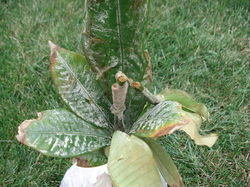 My worst fears were realized when I opened that box above.  This was a very nice, most likely never to be found again, grafted mangosteen. Snapped just above the graft and it would never recover above that point. 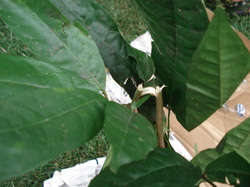 The next casualty from this box was an even more rare plant called a Langsatan.  I got this plant from Sadhu.
©2013 www.tropicalfruithunters.com | Home | T-Shirts & Hats | Blog | Galleries | Education | Links | About | FAQ | Contact me

*Please remember, all photos published on this website, unless otherwise noted, are copyrighted and property of Tropical Fruit Hunters and Jay Cotterman.  If you want to use one of them please contact me first. Thanks!