Growing Annonas in a House or Greenhouse

The trees pretty much take care of themselves when growing in their normal environment.  They require a little extra attention when growing indoors...a house or greenhouse.

Annonas...such as sugar apple and cherimoya like I'm growing, will normally, due to the climate, get an extended dry period several months prior to spring flowering.  This will trigger a spring bloom.  Trying to replicate this when growing in containers is very difficult and can lead to killing the plant from lack of water.  It's also difficult to achieve when growing in a greenhouse and your tree is planted directly into the ground.  Other trees in the greenhouse need watered and when everything is packed in together, it's tough to isolate a single tree like that. 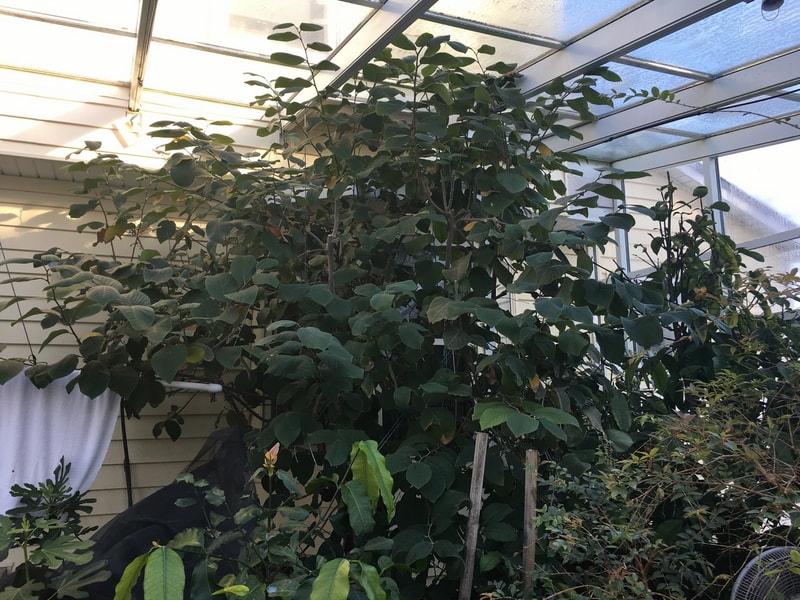 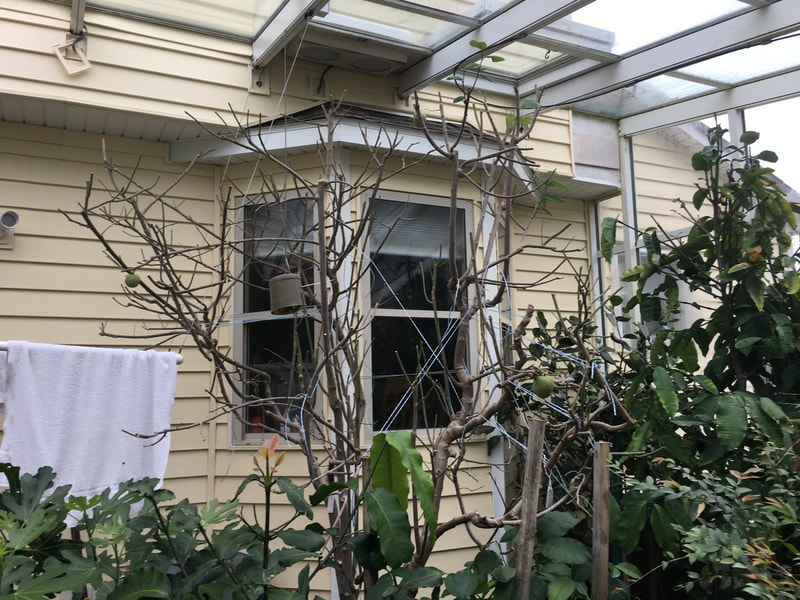 ​Now you see me...now you don't!  That's my big cherimoya above.  The pic on the left is green and full of leaves.  The pic on the right is the same tree after being defoliated and pruned.  This was done at the beginning of March.  Did same for my sugar apples.

The above two pics are in April.  Pic on left is sugar apple and next pic is cherimoya.  Both loaded with blooms and as you can see, I've already been successful at hand pollinating some of the flowers.

The defoliating and pruning not only caused the plants to send out a brand new flush of leaves, but they kicked off a massive bloom as well.  I've experimented with the timing of this and March has worked out best so far.  I've had issues with the cherimoya in the past and attribute most of my issues to bad timing.

The sugar apple set lots of fruit while the cherimoya still drops plenty.  I have to cut back/eliminate the nitrogen when feeding.  The cherimoya is in a non-stop growth resulting in a need to continuously prune the top.  I've severely cut back the top canopy on branches with no fruit developing.  This in turn kicked off more blooms.

The sugar apples are clear winners with blooming and fruit set.  The cherimoya still presents problems keeping many of the fruit developing till the end.  With the size and age of this tree, it should be loaded down with fruit.
©2013 www.tropicalfruithunters.com | Home | T-Shirts & Hats | Blog | Galleries | Education | Links | About | FAQ | Contact me

*Please remember, all photos published on this website, unless otherwise noted, are copyrighted and property of Tropical Fruit Hunters and Jay Cotterman.  If you want to use one of them please contact me first. Thanks!